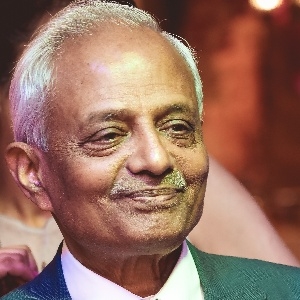 President, Amity Science, Technology and Innovation Foundation
Served in Defence Research and Development Organization (DRDO)
He was awarded D.Sc. (h.c) from five universities in recognition of his outstanding research and development contributions in Life Sciences.

“We should also encourage kids to ask questions even if they make no sense. They should be motivated to become more inquisitive. It should not be like the students just agree to a fact and they start living with it.” – Dr. W Selvamurthy

Eduvoice is working toward creating future leaders. To achieve that we are focusing on improving the Indian Education system with the help of community power.

To improve the education system, we at Eduvoice have started a campaign in which we invite academic experts to give their opinions and insights about the system.

This time we got a golden opportunity to have Dr. William Selvamurthy, President of Amity Science, Technology & Innovation Foundation at Amity University. He shared his opinion related to Indian Education System. Also, he shared some brilliant ideas on which system should work on.

Students are inclined towards money instead of knowledge. What measures can be taken to change the mentality of students who are only opting for the courses that have higher pay?

We are currently living in the era of Knowledge where knowledge is money and knowledge is the power. We had an agricultural era, industrial era, informational era, and now we are finally in the knowledge era. So, people are now looking for knowledge, not just materialistic knowledge but also spiritual knowledge as that is what an individual needs to stay happy in life.

In the knowledge era, India will have a major role in transforming the education system because we will be churning out the future global citizens. If you look at the world’s population which is 7 billion out of which 1.3 billion is of India itself.

I feel that the knowledge workers in this knowledge era will come from India and China because we have a demographic advantage. Also because the average age of people in India is below 25 and that I believe is the most creative, narrative, and also a productive phase of an individual.

Now coming down to the main part of the question, yes some students go for money inclined jobs but some students also go for the job that is skill-oriented for which they have a passion. Now, most of the youth are heading towards the skill-oriented fields only. Earlier it used to be like that the students were only driven to a course because of the higher pay but not now.

We also can’t just deny the fact that the financial aspect is always taken into consideration before choosing the stream. But yes it should not be considered much and colleges and universities should mainly create future leaders who know.

In fact, in my college we also make sure that we make students understand how to handle failures, we also cater to creativity, innovation, and problem-solving skills. We focus on the study but with that, we make sure that they are ready for life as well and I think that is what should be done by every college.

We should make a better education curriculum by which I don’t mean that we need to make students work hard for marks but a good education system consists of knowledge, skills, and the ability to withstand the challenges and opportunities that can be used in contributing to society.

This a psychosocial change and for this I think that people who glorify their kid when they score high marks or receive an award should also appreciate when their kid is compassionate, speaking truth, and is empathetic.

These values should be promoted in the system and kid’s upbringing as this is where the students kind of develop their mindset that money is the most important thing. If these values will be inculcated then I think they will head towards their passion and towards what they want to do rather than going for a money-oriented job.

Parents and the system should motivate, appreciate, and look that students are not just doing things for money. Also, the parents should know that every child is different and not everybody wants to become an engineer or doctor, some children might want to do something else. I feel parents should just motivate their children to follow their dreams.

Lastly, to sum up, I think parents should also inculcate the good values in their children like integrity, compassion, honesty, etc. That is what is going to bring the change.

A large number of students who are getting graduated from colleges lack creativity and critical thinking. What measures can be taken to improve these things?

There should be a continuous evaluation in the education system. The children should be encouraged right from their childhood to have lateral thinking and divergent thinking.

We should also encourage kids to ask questions even if they make no sense. They should be motivated to become more inquisitive. It should not be like the students just agree to a fact and they start living with it.

For example, everybody saw apples falling but it was Newton, who raised the question of an apple falling and that is how he discovered gravity. I believe that children are the best scientists, every time they ask questions like why, what, when they discover something new.

In schools also this should be appreciated and they should motivate students to have a different approach towards the questions. When it comes to colleges, students should be given the liberty to learn things themselves and when they have doubt then they should ask the teachers.

Also, the style of delivering the lectures should be modified, there should be more involvement from the students’ side. Students should be encouraged to learn the applications and not just the concepts.

Lastly, we as the education system should develop things like inquisitiveness, creativeness, and problem-solving skills rather than spoon-feeding what is already there in the textbooks

What according to you is the more important degree or skills? If your answer is skilled then why do the organizations only allow candidates with degrees to sit for the interviews?

I feel a degree is a basic requirement. Since a large number of candidates are coming for the job, there needs to be a way to filter out the people because you can’t just employ all of them and also you want the best of them.

This is where degree comes into play as a parameter to filter out people but obviously, it is not the only parameter. Nowadays corporate companies look for soft skills as well. They see everything like communication skills and leadership skills. So, yes they look for a degree but with that, they look for the person with the right personality and right skill set as well.

Dr. W Selvamurthy opened our eyes with some answers, he changed our view about the system. He made us realize that education is not just about the schools or colleges but also but how the children are being brought up.