Racing to success is in every blood and the youth is no different. All want to be in the top gear which was aptly displayed by DJS students. A team of 27 students from Dwarkadas J Sanghvi (DJ Sanghvi) College of Engineering, Mumbai displayed their version of go-kart on February 16, Thursday in their college premises. The team, named DJS Karting, participated in two major go-karting championships in January and was ranked fifth.

Speaking on the maiden launch of their go-kart, team leader Shreyans Sethia said, “We began conceptualising about the car in January 2016. Our research work started from scratch, since it was the first occasion that our college was into the making of a go-kart for a competition and there was no guidance from any of the ex-students. The design and fabrication of the car was done by the students itself by experimenting with different parts of the car.”

During the first participation in National Kart Racing Championship (NKRC) in October 2016, they cleared the technical inspection and design evaluation round. 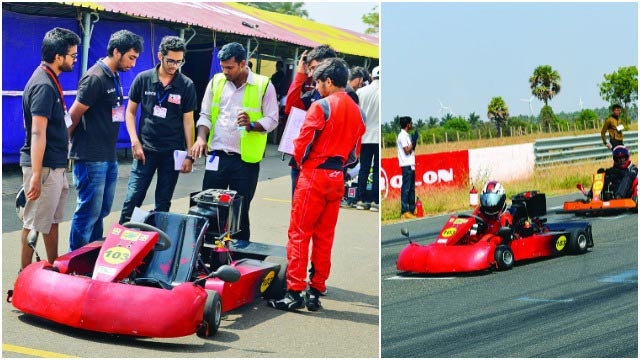 A DISPLAY OF THEIR GO-KARTing EXPERIENCE

After the first round, they had to withdraw from the competition, due to the failure of gearbox. But this did not demotivate them, instead they redesigned the car for the next competition which was funded by sponsors. But this project was initiated by the students with a personal investment of Rs.55000/-. The college also provided basic funds.

Jay Sanghrajka, 20, a third-year student who drove the car, said, that the weight of the engine was reduced and a transmission system was brought in.

Main features that form a part of the car are a fire sensor, infra-red sensor on the display screen of the car, and an app developed to track the speed and fire by the chief, who co-ordinates with the driver during the race.

“The competitions helped them to experience something new and implement the same practically. For the upcoming competitions, juniors will be guided by this team”.