Age is no bar for learning. This was proved right when a school, named ajibai chi shala was established for grannies in Fangane village at Murbad in Thane district. Sheetal More (26) is the lone teacher for this special cause and she prides this job. Sheetal is ecstatic about her 29 students ability to sign. This was one of the objectives of the seniors’ education initiative in which all the women students, above 60 should know to sign, thereby putting an end to thumb impressions on official documents. Professor Yogendra Bangar has spearheaded this noble cause by starting the school on International Women’s Day, March 8.

TEACHER’S TAKE ABOUT THE STUDENTS

Sheetal says that praising one aaji by her does not go down well with other aajis. They complain that had they got same attention and focus, they would have also produced good results. So, she began praising the entire class at once for a good result without singling anyone as special. An all along, Sheetal has learnt many aspects of teaching.”

The school has something unique to its credit. It teaches a 92-year-old student as well.

Here Sheetal has to take special care while teaching her students because each is different. One of the front benchers in her class is Kantabai More, her mother-in-law. She is at times strict with them for being less attentive. And in such cases she feels a bit upset in pulling up her mother-in-law. Sheetal feels that getting angry at them, really upsets them.

The deteriorating senses of her students is a big challenge for Sheetal to deal with. “Some hearing problem for which she has to go near them to explain things. Some aajis have poor eyesight. Another challenge she faces is dealing with her oldest student, a 92 year old aaji whose hands shiver while writing. She has to hold her hand and help her in writing. 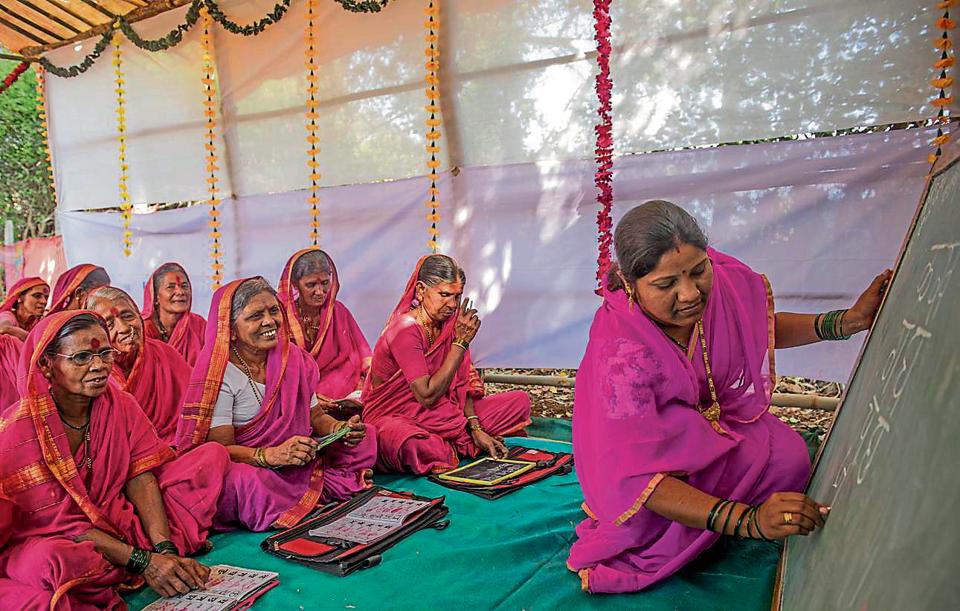 Sheetal says that they have been focusing on barakhadi (alphabets) and numbers, to teach the students. The uniform is a pink sari. Those who had lost their husbands were unwilling to wear green sarees, which was earlier decided for them. So, pink saree was chosen for all.

The shala which operates from a village school, run by zilla parishad has classes between 2 pm-4 pm on all days, except on Thursday because aajis go to attend satsang. Gangubai Kedar (65) says, “during their time when people went to school, women were confined to their homes for handling household chores and generally the atmosphere was not conducive for women education. Still she feels glad to have got this opportunity to learn though it has come very late.

THE SUCCESS OF THE SCHOOL

Sheetal says the main reason behind the running of this school till date is “I think the only reason we could run the school is that the aajis were and are happy about it. Unless there is some work, none of them like to miss a single day at school.” The idea for opening the shala struck Bangar’s conscience when he found that nearly all village women were illiterate and unable to recite the epics on Shivaji Jayanti.

The grannies assemble inside the school and begin the day by reciting a poem, “Me mothi zhalyavar shalet jaaein dada barobar (When I grow up I will go to school with my elder brother).” Some of them forget the lines and all of them stop abruptly. When their teacher asks why they stopped reciting the poem, all of them start giggling, like schoolgirls do.