With an all-India rank of 35, Ramya Narayanaswamy of Hyderabad topped in the girls category. With 7,505 qualifiers in their kitty, the twin states towering success, boasted big. But the top 10 rankings eluded the twin states, UP followed them with 7,210 rank holders. It was only, Vaddela Ashrut of Hyderabad clinching the 17th rank was the closest to the top 10 standing.

This proved to be a huge platform for girls to prove their worth. Overwhelmed with her achievement, Ramya was of the view that no job is that tough if we are determined to perform. Our hard work and perseverance will earn us the fruit of success, irrespective of the gender. Speaking about her future, she intended of developing a 3D product by pursuing virtual reality projects by opting for computer science in Indian Institute of Technology, Bombay. 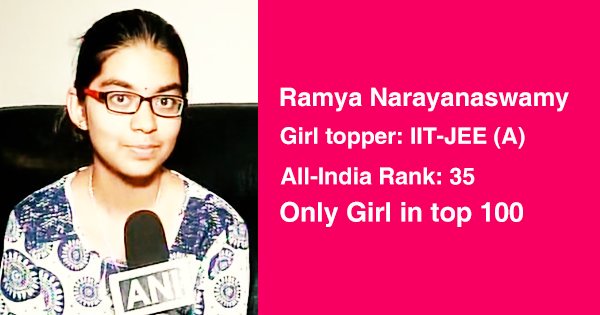 This feat is near about the double of what they earned in 2016. They jointly had 3,965 qualifiers, including five students in the top 10, with the best being AIR-3.

As per the data provided by IIT Madras – the nodal institute which conducted the exam this year – of the 50,455 candidates who qualified from across the country, 3,765 were from Andhra Pradesh and 3,740 from Telangana, more than the number of students who appeared last year. Telangana registered a total of 12,494 candidates against 11,042 in 2016, followed by Andhra with an increase of 45% rise in the number of candidates.

“The success rate has also increased, which goes to show that students are more inclined towards this field. Year after year, tough tests have not altered the determination of the students who intend to make big in this field,” said Dr. B S Rao, Founder and Chairman of Sri Chaitanya Educational Institutions.