Going a step beyond for being the first-of-its-kind University in the country, Jamia Millia Islamia has pened graduate (UG) and post-graduate (PG)  programmes for Army personnel. An MoU was been signed between Vice Chancellor, JMI, Prof Talat Ahmad and Lt. Gen. Ashwani Kumar, Adjutant General, Integrated Headquarters of Ministry of Defence (Army).

With this, Jamia becomes the first University in the country where personnel of all three forces can enroll for degree and postgraduate courses of their choice.

Lt. General Ashwani Kumar has appreciated the move and pointed out the fact that since Army personnel retire in 30s, ‘it is imperative that they are provided with opportunities to complete their education, enabling them to find job opportunities outside the uniform.’

Earlier, Jamia had signed MoUs with Indian Air Force and Indian Navy as well. This has enabled close to 12000 personnel to pursue higher education and improve their career prospects.

About the MoU, Jamia Vice Chancellor Professor Talat Ahmad said, it will be the varsity’s contribution towards nation building. ‘It is a matter of proud privilege for the university to be able to serve all the three forces,’ he added next.

Jamia Millia Islamia, an institution originally established at Aligarh in 1920, became a Central University by an act of the Indian Parliament in 1988. In Urdu language, Jamia means ‘University’, and Millia means ‘National’. 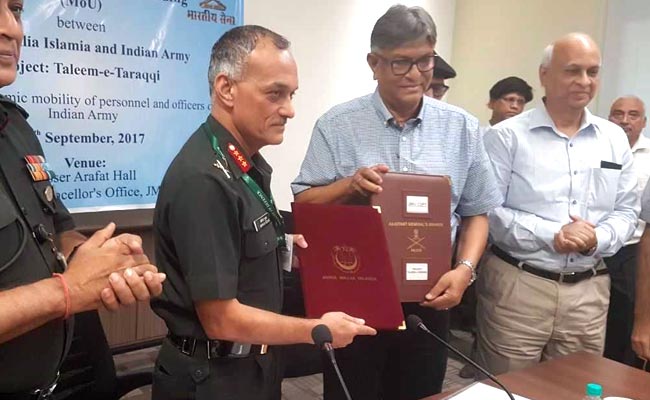